An Opportunity to Pay Back 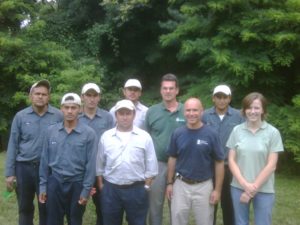 Yesterday, nine members of the Allentuck Landscaping Co. team once again had the opportunity to take part in Planet's Renewal and Remembrance at Arlington National Cemetery. This is the fourth year that we have participated in a day that brings together over 400 of our landscape colleagues from around the country to honor our fallen American heroes and to make their final resting place all the more beautiful. In all, over $300,000 worth of materials and labor were donated on this one special day.

I hope you will grant me the liberty to share with you my personal account of the day.

My task this year was to organize and oversee all three of the landscape projects being completed. I arrived at Arlington before sunrise in order to get an early start before the "army" of landscapers got there. Knowing that I also had a unique opportunity, I quietly walked up to the Tomb of the Unknowns. As the sun came up over the city, the lone sentry made eye contact with me but never wavered from his duties. I was in awe of his dedication. The sunrise was amazing and I knew that the day would be even more so. 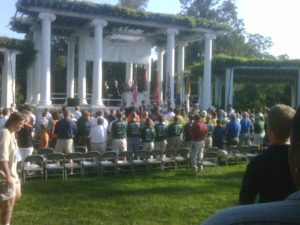 After an inspiring opening ceremony, work got underway. In addition to the three landscape projects, other work included aerating and liming of turf, tree pruning and lightning protection, and irrigation installation. Crews were moving at a fantastic pace as I made my rounds.

One of our projects involved 50 children planting perennials. We had a lot of press
gathered around this area for photo opportunities including NBC, CNN, P. Alan
Smith from HGTV, and an old friend, Bob Madigan from WTOP. I was thankful that the media was covering our efforts.
Around late morning I stopped to check on "Team Allentuck" to see if they needed anything. As I got out of my car, I saw that a ceremony was taking place in the adjacent Section 61, which is where soldier from Iraq and Afghanistan are laid to rest. I felt frozen, watching the flag being solemnly folded and handed to the soldier's family. It was then that I noticed that the sound of shovels behind me had quieted. I turned and saw every member of our team had stop working to respectfully take in the scene. As the family left, I fully realized that they could not appreciate the work we were doing today, but I hoped that when they returned some time later to visit their hero, the work were doing would help to bring them peace. This is what Renewal and Remembrance is all about.

The day had been a spectacular success. I made my way down the hill to head home but stopped at the gate one last time to take a look around. I have been to Arlington many times over the last few weeks and years, and I always get choked up when it is time to leave. I hope I always do.

P.S. Here is a link to a story that appeared NBC Nightly News about Renewal and Remembrance. I hope you enjoy it.